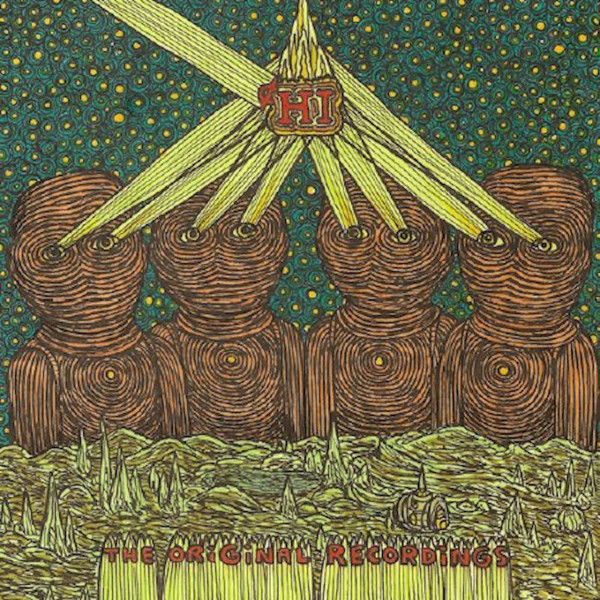 Chi started in the late punk years in the early eighties. A time of change and mind-blowing albums. We started doing sound experiments in an old farm in Moordrecht (thanks to Jan van Rhee and Kees van der Veer). In the summer, all the doors and windows were open; birds flew in and out. In the distance we saw the highway to Rotterdam. In the winter we sat close together, no heating, only blankets, candles and brandy. We did sessions of 3 days and nights. We brought a full PA-system for every session (thanks to Jurgen and Fijko) to get the right feel. Usually we played from the late morning until sunrise. Fijko was playing his spacey videos and projecting trippy slideshows. Jurgen was creating all kind of effects and recording everything. We used the Commodore 64 to create sequences. We had two synths (a Juno 60 and JX3P), a few guitars, an old Revox tapedeck for loops (some loops were 7 metres long running past bottles) and a lot of weird handmade instruments, percussion, bamboo flutes; an old, broken piano, a small Philicorda organ and various effects like water, shaken yogurt (Soppin), mouth-sounds, street-noises, etc. Essentially, the music is half electronic, half acoustic. What made it special is that we also performed it live. We brought our personal hifi-sets on stage for easy listening comfort. We carried 7 monitors for the video and had 3 big screens for slideshows. Highlights were our premiere at Lantaren/Venster (Rotterdam, 1986 – 2 nights sold out, thanks to Theo Hensen) and our Paradiso (Amsterdam, 1987) show on the main stage broadcast live on national radio. We ended up with a bunch of punks and freaks, but they really loved it.

Our cassette was a collectors item at the legendary Amsterdam based label and record store Staalplaat. They released a CD 15 years later in 2000 on their new label Container Music. Now, 30 years later, Astral Industries (thanks to Ario Farahani) releases an exclusive limited vinyl edition. We’ve added the track ‘Hopi‘, which was previously only released on cassette. It’s a track that I made as a guideline for CHI in 1984, featuring a Hopi elder speaking of Hopi prophecies and the future of the world.

Who knows what may happen next…