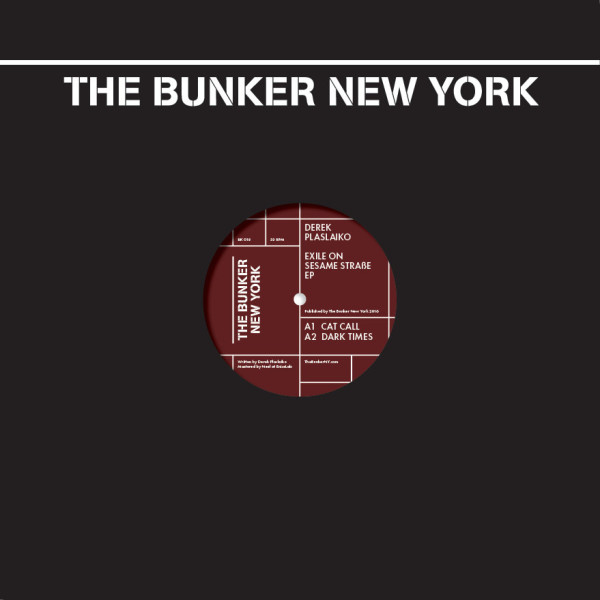 The world knows Derek Plaslaiko primarily as a DJ. Born just outside the birthplace of techno, Plaslaiko came up in the 1990s, learning the art of the DJ in Detroit’s warehouses, clubs, and raves. He caught the attention of Carl Craig through his late ’90s residency at legendary Detroit club Motor and was subsequently invited to perform at the inaugural Detroit Electronic Music Festival in 2000. He made his way to New York, and in 2006, began his relationship with The Bunker, becoming one of the party’s resident DJs and a critical part of the party’s sound and vibe.

Eight years later, the rest of the world had taken notice — Plaslaiko‘s 2014 Boiler Room set is a 12-hour-long DJ masterclass (with babe in arms, no less). As it turns out, he’s pretty handy with gear, too, as his latest release on The Bunker New York proves, featuring four tracks of back-to-basics, no-nonsense techno.

Exile on Sesame Strasse begins with “Cat Call,” its most psychedelic, demented tune. Insistent synthesizer squelches give way to manic bleeps and steadily developing percussion until a ghastly voice intones a dancefloor mantra — this is one for late nights and sweaty warehouses. Next, “Dark Times” switches gears completely, showing off Plaslaiko‘s range as a producer — as its title suggests, it’s a hypnotic, brooding work in a melancholy mood, functioning just as well on the home stereo as it does on a club soundsystem. “Unhinged” is techno in its purest state, a slow-building tune built around a subtle acid melody reminiscent of Laurent Garnier. The record ends with “In The Clouds,” an uptempo roller that proceeds as expected until, halfway through its running time, its drum break gives way to a hazy, murky interlude, finishing off with machine gun snares for maximum dancefloor intensity.

“I’ve always said I didn’t want to focus on producing unless I had something to say,” explains Plaslaiko. “I think everything informs my work — my personal history, my history as a DJ, Detroit, my Interdimensional Transmissions crew, and beyond.” And the driving force behind these tracks in particular? “Simple: I try and picture the context in which I’ll be playing [my tracks],” he says. “That’s what I’m thinking of during the production process: Where and when will I be playing it?“