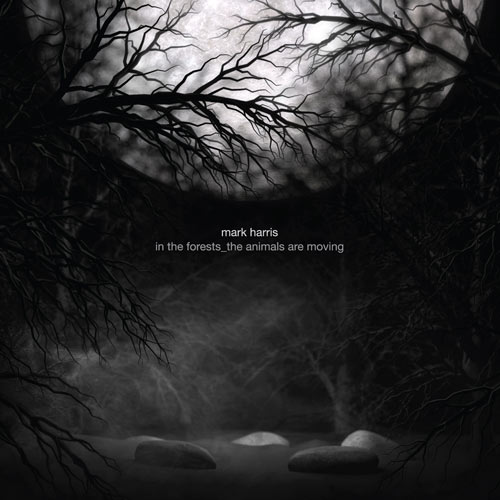 The genesis and first initial recording of In the forests_the animals are moving began in early 2014, with a series of experiments with modular synthesis processes mimicking the harmonic properties of bell tones. I wasn’t working towards any goal. I had recently finished my last release The Angry Child and although I had been booked for a few live concepts, I considered this period “downtime” so took time out to experiment with some new software and hardware I had acquired As I proceeded, I became more interested in the harmonic properties of bell tones, and as I work primarily an improvisor I would improvise short compositions which I would then make into “mix tapes” which I would listen to more or less constantly whist doing the day job and had as background audio at home. Gradually when I came back to my studio and improvised new compositions I found myself subconsciously reacting to previous work I had been listening to, these new pieces were then mixed down to new “mix tapes” which became new source material.

So gradually, as the project proceeded I added other elements, live electronics, field recording and some heavily proceed prepared guitar all reacting to those initial improvisations and gradually over a year and a half’s work the piece which became “in the forest_the animals are moving” took shape. The whole project has had very little preplanning and grew organically from the original source material..

As for the title, as I mentioned I spent a long period just listening to these original “bell improvisations” and these had obviously wormed there way into my subconscious As I had a recurring dreams over the period of time working on the project of being alone in a forest at night and hearing a single repeated bell which I used orientate myself to find my way home and avoid the wild animals that I could hear moving around unseen in the forest…

I hope the listener catches some of that mood, please enjoy – Mark Harris