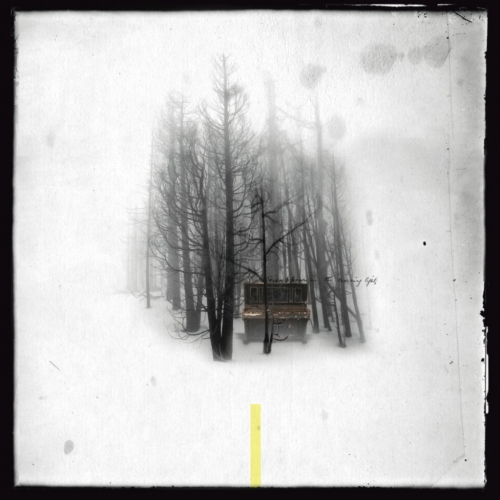 Canadian composer Nicolas Bernier creates sound performances, installations, musique concrète, live electronics, post-rock, noise improv, video art while also working with dance, theatre, moving images and interdisciplinary contexts. In the midst of this eclecticism, his artistic concerns remain constant: the balance between the cerebral and the sensual, and between organic sound sources and digital processing. Music For A Piano / Music For A Book is his latest release, presented as a double album in an amazing package designed by Urban9.

“I began to work on the composition of these two works during a residency at The Banff Centre, a quite amazing place welcoming artists from around the world in the fields of media art, classical music, dance, photography, theatre, and so forth. Literally in the middle of the Canadian Rockies, I was working in one of the little studios during these two months. Trees, mountains, fresh air, art… a dream. In the room, there was not much but this strange and ancient music making object, this instrument of a startling complexity. I have always hesitated in front of the piano, feeling small before an icon of several centuries of music. But I jumped. The piano and I spent several nights tinkling together to the songs of crickets in July and Music For a Piano is the result of those nights.

I had to wait about ten years to be fortunate enough to meet an author who would be enthusiastic about having an exploratory music soundtrack for his book. From the sessions with the piano, I then started another set of tracks for the third novel of a quite brilliant young author here in Montréal, Marc-André Moutquin. The book entitled “Entre l’aurore et la nuit” will soon be published by Guy Saint-Jean Éditeur. The plot of the novel takes place in Nunavik, the cold, desertic northern region of the province of Québec. I’ve composed seven eerie sound aurora, an etherreal soundtrack that stands like the counterweight weight of the heavy climate that can sometimes inhabit this part of the world.” – Nicolas Bernier –