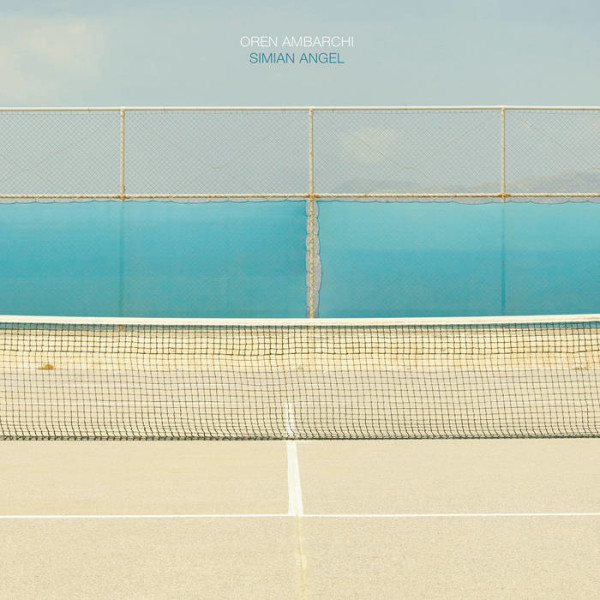 After a trilogy of spectacular explorations of relentlessly driving rhythms – Sagittarian Domain (2012), Quixotism (2014) and Hubris (2016) – Simian Angel finds Oren Ambarchi renewing his focus on his singular approach to the electric guitar, returning in part to the spacious canvases of classic releases like Grapes from the Estate while also following his muse down previously unexplored byways.

Reflecting Ambarchi’s profound love of Brazilian music – an aspect of his omnivorous musical appetite not immediately apparent in his own work until now – Simian Angel features the remarkable percussive talents of the legendary Cyro Baptista, a key part of the Downtown scene who has collaborated with everyone from John Zorn and Derek Bailey to Robert Palmer and Herbie Hancock. Like the music of Nana Vasconcelos and Airto Moreira, Simian Angel places Baptista’s dexterous and rhythmically nuanced handling of traditional Brazilian percussion instruments into an unexpected musical context. On the first side, Palm Sugar Candy, Baptista’s spare and halting rhythms wind their way through a landscape of gliding electronic tones, gently rising up and momentarily subsiding until the piece’s final minutes leave Ambarchi’s guitar unaccompanied. While the rich, swirling harmonics of Ambarchi’s guitar performance are familiar to listeners from his previous recordings, the subtly wavering, synthetic guitar tone we hear is quite new, coming across at times like an abstracted, splayed-out take on the 80s guitar-synth work of Pat Metheny or Bill Frisell. Equally new is the harmonic complexity of Ambarchi’s playing, which leaves behind the minimalist simplicity of much of his previous work for a constantly-shifting play between lush consonance and uneasy dissonance.

Beginning with a beautiful passage of unaccompanied percussion dominated by the berimbau, the side-long title piece carries on the first side’s exploration of subtle, non-linear dynamic arcs, taking the form of a gently episodic suite, in which distinctive moments, like a lyrical passage of guitar-triggered piano, unexpectedly arise from intervals of drifting tones like dream images suddenly cohering. In the piece’s second half, the piano tones becomes increasingly more clipped and synthetic, scattering themselves into aleatoric melodies that call to mind an imaginary collaboration between Albert Marcoeur and David Behrman, grounded all the while by the pulse of Baptista’s percussion. Subtle yet complex, fleeting yet emotionally affecting, Simian Angel is an essential chapter in Ambarchi’s restlessly exploratory oeuvre.