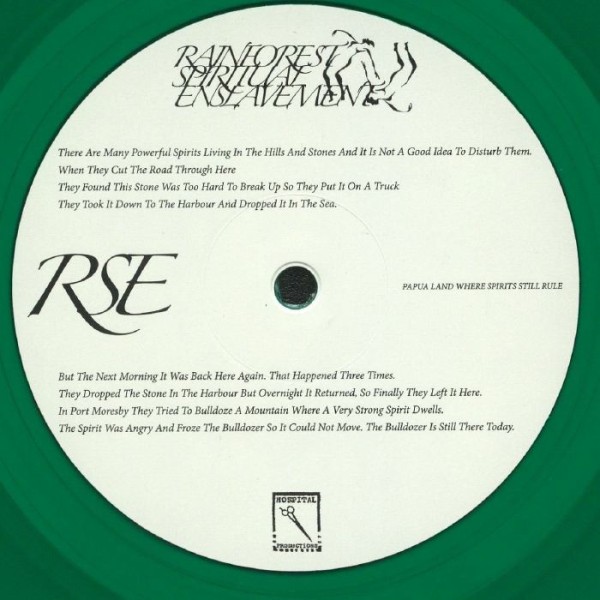 Completing the reissue cycle of Rainforest Spiritual Enslavement‘s ambient invocations, Papua New Guinea (2012) is rendered in this new remaster by Paul Corley (0PN, Tim Hecker, Ben Frost) and sacrificed to vinyl for the first and last time on Hospital Productions.

Slotting alongside 5 previous vinyl reissues of the original tape editions released over the last 12 months, Papua New Guinea loops back to the start of the saga, affording a clearer and more immersive way into one of Dominick Fernow‘s most (oc)cultish projects.
The eight track dosage of Papua New Guinea generated a wave of speculation as to its shadowy provenance back in 2012. It sounded little like anything else in circulation and left heads genuinely floundering for answers to its riddling track titles and extreme aesthetics; a steeply evocative combination of near-infrasonic sub-bass tones and cold but humid environmental sounds laced with slow, looping, tribal rhythms.

In stark contrast to proceeding instalments’ increasing track lengths, Papua New Guinea is comprised of eight relatively concise parts, with each side of vinyl relating to one of the original tapes. The A-side seeps into consciousness in frightening style with Paul Corley‘s remaster now bringing the long, slippery sub-bass descent of There Are Many Powerful Spirits Living In The Hills And Stones And It Is Not A Good Idea To Disturb Them to life with uncanny psychoacoustic subtlety, before hypnotic rhythms take possession for the duration and the listener is eventually deposited at the bombed-out ambient ecology of The Spirit Was Angry And Froze The Bulldozer So It Could Not Move. The Bulldozer Is Still There Today. What occurs between those points defies description in the manner of the strongest psychedelics, and likewise, requires deep immersion for full comprehension.