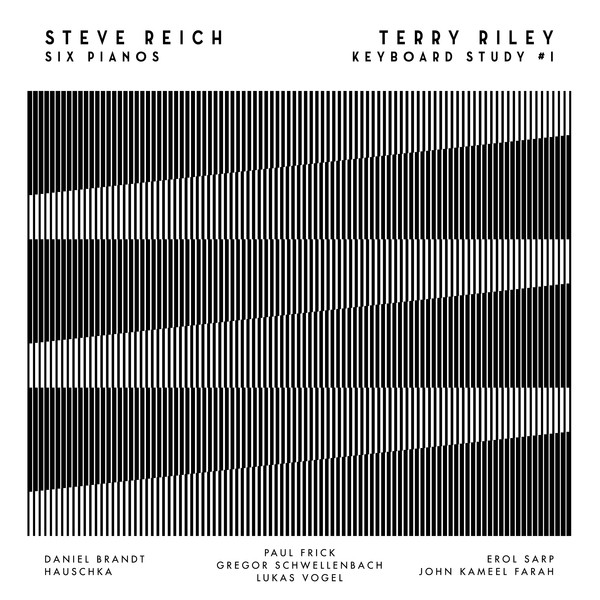 The basic idea came up at the beginning of the 70s at The Baldwin Piano & Organ Company in New York. During a rehearsal phase Steve Reich spent in this very piano store, the idea emerged of writing a composition for all the grand pianos available to him at the company. By the time of the finished piece, the actual number of pianos had settled down to six, whereof Six Pianos developed in 1973.

On the occasion of his 80th birthday, the six pianists declare their love to Steve Reich and his composition with this release. Shaped by electronic club music as well as their classical education, they form Six Pianos in dignified modernity and top it off with today’s sound aesthetics and technical recording possibilities.

What you will be hearing is not the recording from the Kölner Philharmonie (Cologne Philharmonics) but the ensemble play of six different grand pianos in six different locations, throughout Germany. Each pianist performed his part on his piano using his typical studio equipment and passed the recording over to the next one. Thus the six characteristic and individual timbres of the performers overlay to create the overall picture – Six Pianos the way it should be looked at in 2016. “Pianists are soloists and lone warriors by nature”, as Gregor Schwellenbach once said. But the initiator not only won over solo artists to the greatest possible extent such as Hauschka or John Kameel Farah but also musicians from “Brandt Brauer Frick” and “Grandbrothers” as well as their ensemble partners: Jan Brauer mixed Six Pianos in the studio while Lukas Vogel provided delays for the b-side.

Keyboard Study #1 by Terry Riley is a worthy b-side opposed to Reich’s composition. The piece is kind of a building set of ever lengthening, repetitive patterns played against each other with the right and left hand displaced. The composition proposes various possible combinations for the performer to choose from and repeat at will. And what the performers have chosen proves Gregor Schwellenbach’s assumption: “Especially Terry Riley’s and Steve Reich’s music are open doors for pianists socialized by pop music and their audience.“