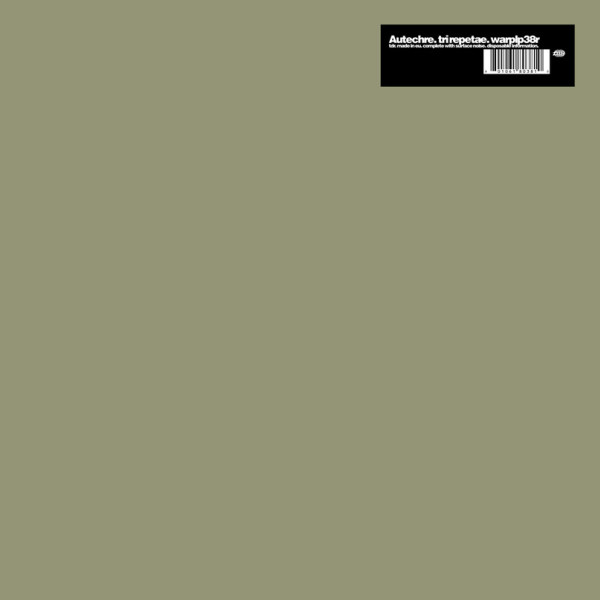 Tri Repetae, the third album from Autechre finally made available again on vinyl, having been out of print on vinyl since 2001.

On reflection, Tri Repeate stands tall as one of the most out-there (and if you know what that means…) and boundary-pushing releases from Ae ever. Going back to the group’s roots as b-boy’s, Tri Repetae features ten variations on street sounds from hip-hop and techno to industrial and jungle. Released at a time when producers were ripe with ideas for cosmic breakbeat experimentation, Tri Repetae mixed the glitchy twisted dynamics of EPs such as the criminal justice bill protest Anti and sculpted a long player that resembles some of the most ‘floor friendly’ Ae to ever grace a packed nightclub soundsystem.

The ten tracks pulled influence from previous outings, from the glacial Amber chug of Overand to the Incunabula acid of Leterel. But the overall sound is one of mixing influence from the avant-garde of Iannis Xenakis, Edgard Varese & Tod Dockstar with the mid 90’s post-hardcore sound of jungle. For anyone looking to get to grips with Ae but wanting something that bridges the gap between the early analogue escapism and the latter deconstructionist stance of elseq, Tri Repetae is the perfect point to dive into. Mixing elements of groups such as Coil at their most industrial, the austere techno of the Downwards crew and the cold yet funky electro of Man Parrish, they composed an album that still, twenty one years since its release, has one of the most singular sounds for anything resembling electro techno, and what other group can you think of who have you can say have ever managed that?