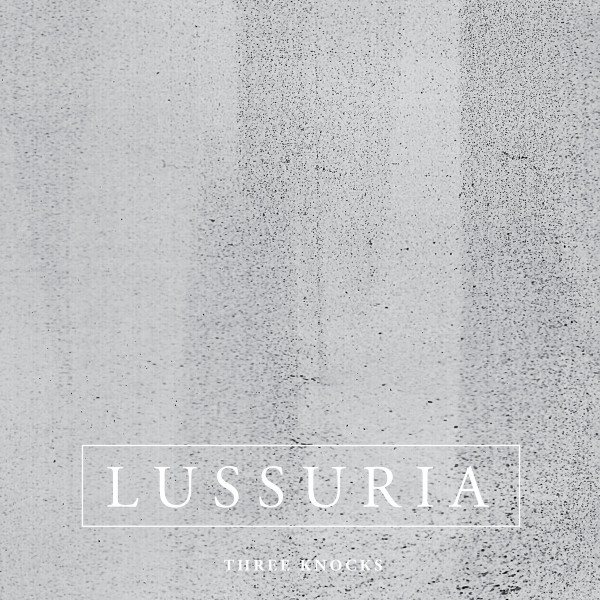 Jim Mroz is Lussuria. After a highlight performance in Mexico City at the CDMX earthquake benefit, and performing on Prurient’s controversial Rainbow Mirror, Mroz returns to Hospital Productions for his new album, Three Knocks, recalling the deep deja vu–driven abstraction of his debut, Ghost Entanglement, with the spacious power of his classic American Babylon.

Three Knocks serves as a warning, as the artist’s grandmother was suddenly stricken with an unexplained illness resulting in unconsciousness. When she came to, she relayed the tale of “three knocks” to her son.

In Lussuria‘s words: “My grandmother returned from the hospital the other day. What started as an allergic reaction escalated to something unexplainable. By the time she had arrived to the ER, the reaction had spread rapidly and treatments were not reducing the swelling. Doctors were having trouble determining the cause and she was put in a medically induced coma, administering a breathing tube. Twenty-four hours later, the swelling did not go down. Some signs of progress were starting to show two days later, and doctors were considering bringing her out of the coma the next morning. When she finally came to, the mixture of Propofol and other drugs had left her in an incoherent state. Communication was cryptic and bizarre in her calm states. When awake up, she was abusive and antagonistic. Untrusting of the hospital staff, she frequently lashed out at them. Cursing at nurses, lunging at doctors. She starting verbally ridiculing my brother, while asking for morphine from another. During my visits to her, she begged me to help her escape out of the hospital since the nurses were really devils. As the days went on, she was still refusing to eat or drink anything from the hospital since she was convinced everything there was tampered with. It got to where I had to sneak in soup from the neighboring Chinese restaurant in order for her to eat. During one of these meals, she confided to me that she was visited by angels in a dream with a message that disaster was imminent. I was instructed to contact the rest of the family and have them pray for safety. On her final day in the hospital, she was back to her normal self. She remembered very little of the initial days in the hospital. She recollected to me on her moments working all alone in her office just before the incident had occurred. There were three solid knocks on the door to her office. Slow and heavy, but not to the point of being a pound. When she had answered the door, no one was there to greet her. Curious about these omens, she began to research the meaning behind the sequence. She discovered that these knocks were meant to be fatal and a mockery of the Holy Trinity. One knock for each crucifixion.”

The cautionary tale is explored despite its electronic nature is rebuilt organically using a variety of obscure and bizarre objects and field recordings, from the shores of Long Island’s empty asylums to the use of a human femur flute entrusted to Mroz from a Hawaiian peer called a ‘kangling': the practitioner plays the ‘kangling’ as a gesture of fearlessness, to summon hungry spirits and demons so that they may satisfy their hunger and thereby relieve their sufferings. It is also played as a way of “cutting off of the ego.”

In the crescendo of the title track one can hear ammo casings, oil drums, and the ominous sound of knives being sharpened. On Fentanyl Chaser, Mroz goes in an opposing direction, working with tape manipulation and cut-ups of opera and choral loops mixed with metal chimes. On The Fear in Letting Go, the femur flute is mixed with metal percussion from an iron lung. How Lussuria gained access to the unsettling array of anti-instruments is unclear, but the results reach a psychological panic brought on by the imagination turning tangible – and full of warning.